It is in the Lyzel suburb in Saint-Omer (62 – Pas-de-Calais) that the Boat Makers are working to safeguard the centuries-old tradition of building « bacôves » and « escutes ». These beautiful Flemish oak boats, heirs to almost a millennium of know-how, were used until the end of the 1980s by market gardeners in the marsh of St-Omer.

Today, craftsmen open the doors of their workshop to the general public while offering an authentic discovery of “their” marsh by boat. A vast natural space recognized by UNESCO, watering 15 municipalities thanks to 700 kilometers of canals!

The adventure of the “new” Boat Makers began in 2009. Eager to save local boats from disappearing, Rémy COLIN opened his small shipyard. In the meantime, he had the opportunity to complete a training about wood as well as a one-year stay in Arcachon to learn the basics of shipbuilding. He also received from his great uncle the manufacturing secrets of escutes and bacôves. A treasure jealously guarded for centuries by the old local corporation of naval carpenters!

A little later, his father Vincent, joined the adventure and received the precious training of traditional boatbuilding, from his son. An oral apprenticeship that the masters once dispensed to the companions and which gave birth to the COLIN company ” son to father” at the beginning of the 21st century!

Since then, the workshop has multiplied its creations while offering  to all audiences (families, schools, groups, etc.) discovery tours of the shipyard and river cruises in the marsh of St Omer.

In the meantime, the company has joined various networks:

– The network of eco-actors of the UNESCO biosphere reserve of the “marais audomarois”,

– Without forgetting the closed club of “Entreprises du Patrimoine Vivant” (EPV – Living Heritage Companies) granting the privilege of working with prestigious destinations such as the Versailles estate!

A unique and exotic place

Since 2009, the company has made its way and brings together in its workforce a group of friends, passionate about traditions and the history of the Saint-Omer marsh. This spirit of camaraderie and unfailing optimism has allowed the creation of many immersive activities around the traditional shipyard and its mini-sawmill:

– Rowing or electric boats as well as canoes to hire for unique touristic circuits in the heart of the labyrinth of the marsh;

– A tavern proud to use local and seasonal products as well as Flemish games;

– The possibility to have a local lunch on a cruise

– An exhibition of old tools;

In short, a real island of life and sharing dedicated to local professions, ecotourism and slow tourism! 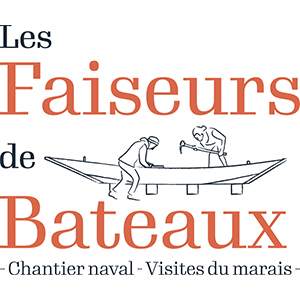